How to get a proposal accepted early for RailsConf

I'm really excited that I'm going to be speaking at RailsConf this year about Service Oriented Authentication.. While the process is fresh in my mind, I wanted to make some notes (mostly for future me) about the things that I think helped me in having my proposal accepted.

Awesomely the RailsConf organizers published data about the rate of proposal submissions. This is the graph: 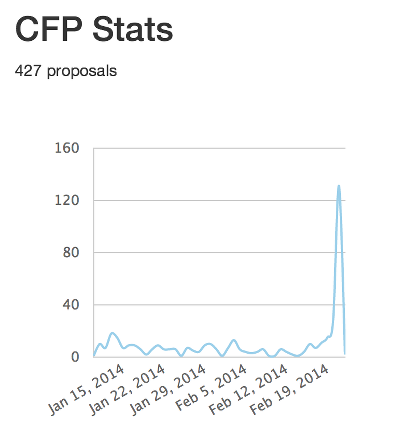 You can see that there's a small spike in the first few days, then a pretty low level of submissions every day until a huge spike on the very last day.

I got my first proposal in somewhere around the 2nd or 3rd day of the CFP being open: 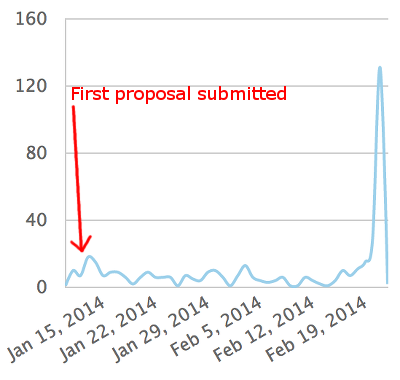 I'd had the topic in mind for a while, and had already given a talk in the same vein, so as soon as the CFP opened up I took a little time to refine a few ideas, write and edit an abstract, which goes in the program, a details section, to let the organizers know more about what I planned to present, and a pitch section.

My pitch contained a tale of woe about my journey to RailsConf last year. I had hoped to learn about how to get started with Service Oriented Architectures and I had found several talks about SOA, but they were either too broad (why would you do SOA?) or too specific (how do you handle boat loads of JSON?). I promised that my talk would be just right and offer everyting you needed to know.

The proposal committee was really on the ball and I got feedback on my talk either one or two days later. 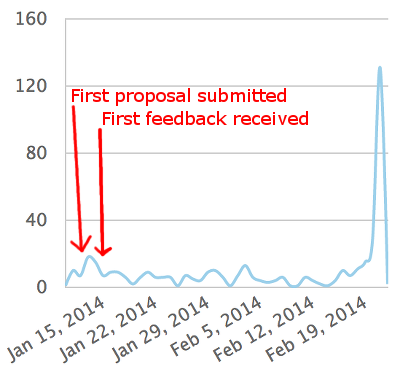 That first feedback rightly pointed out that it was unlikely that I could cover everything in one 35 minute session. She suggested that I try to find a more focused topic that would allow for some depth during the session. Since one of the prominent topics in my first proposal was the authentication peice of SOA, she asked if I might be able to turn that into a whole session.

I got back to work and wrote a new abstract and detail section and only slightly modified the pitch. I submitted this as a whole new proposal a day or two later. 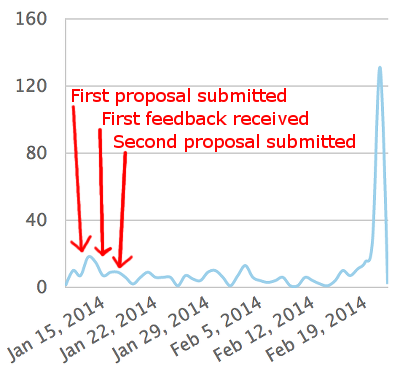 I didn't hear anything else on this proposal for weeks. Over the course of the next few weeks I submitted a few other un-related proposals and got prompt feedback on those as well.

Finally on the evening of Feb 20 I got an email saying that my Service Oriented Authentication talk had been accepted. This email came a good 26 hours before the CFP closed. There were over 120 submissions (roughly 1/4th of all submissions) thrown into the running after my talk had already been accepted. 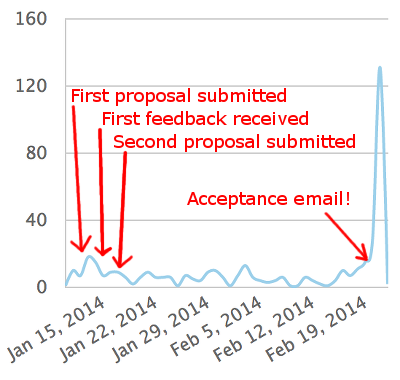 Seriously. Do it early.

I don't have any info from the organizers to know anything for sure, but I have a theory about this. My theory is that once I'd submitted my second proposal, which directly incorporated feedback from them about what they were looking for, the organizers had four or five weeks to get used to the idea of my talk being on one of their tracks. It was available to them for some of their earliest rough drafts of a schedule, and every draft after that. In situations like this familiarity breeds comfort (this is how advertising works) and by being in the process early I think I gave the organizers a chance to get very familiar and comfortable with my proposed talk.

If I'd waited until the last day, I would have had zero chance of being in the early acceptance group. Additionally my overall chances of being accepted, even with the same proposal, would probably have gone down, due to some other SOA talks already occupying the mind space of the organizers.

Thanks to Rob Sullivan for reading a draft and offering feedback on this post.

Link All The Things!